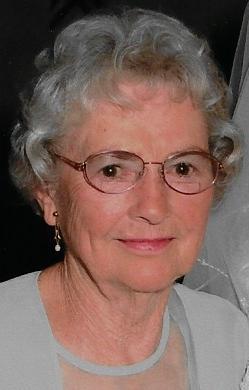 Patricia “Patty” Anne Stayer, age 96, from Greentown, Ohio, peacefully passed away December 21, 2020, at her home, with her family by her side.

She was born on December 3, 1924 in Canton, to Raymond A. Menegay and Grace K. Menegay (Schlemmer).  At the age of two, Patty resided in Greentown with her grandparents, Edwin and Maude Schlemmer.  A lifelong Greentown resident, she graduated from Greentown High School in 1943, where she met her husband, Jack “Pinky” S. Stayer.  They were married for 56 years, till the time of his death on January 28, 2005.  Patty worked at the Hoover Company for 10 years and the Navy Department during WWII.  Early on, Patty was much involved with the Greentown United Methodist Church.  Though not active in her later years, she never lost her faith.  Pinky and Patty traveled many times over the years to Myrtle Beach, soaking up the sun and spending time with the friends they made there.  Pinky was a life member of the Greentown Athletic Club.  They went on many golf trips with the Club gang and enjoyed many Club parties and functions.  Patty enjoyed the company of the family pets including, Tuffy and Muffy, her favorite cats.  Patty and her daughters enjoyed their ocean cruises.  She loved to visit the islands and shop.

Patty was laid to rest at Greentown Cemetery on December 23, 2020, with immediate family attending.

A special thank you to the nurses at Crossroads Hospice for the compassionate work they do.

Hecker-Patron Funeral Home was entrusted with Patty’s care and  serving her family during this difficult time.

To order memorial trees or send flowers to the family in memory of Patricia "Patty" Stayer, please visit our flower store.