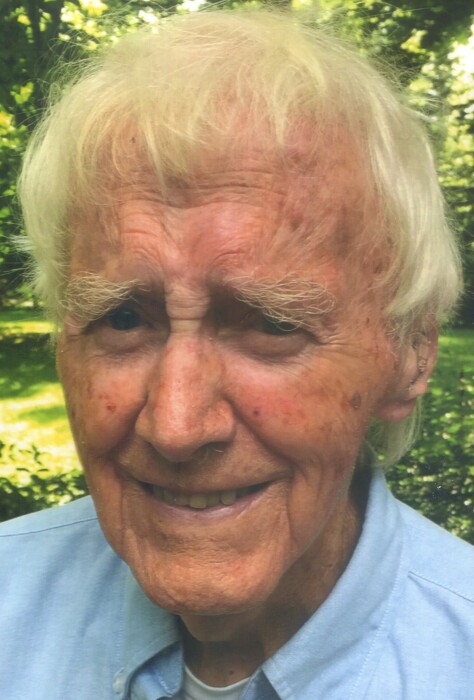 Louis Ramsburg, 92, of Hartviille, died of complications from a fall, on May 22, 2021. Lou’s upbringing as a Wesleyan, along with his unconditional and generous love of family, were the guideposts of his long and well-lived life.

Lou was born in Canton to parents, Louis and Anna, the youngest of four, two sisters, Helen (Moreau) and Kathleen (Wunderle). His brother, Edwin, the oldest of the four, was Killed in Action in World War II, a gunner whose plane was shot and plummeted into the Mediterranean on a mission to Libya. Lou followed his brother into the military, enlisting in the Navy when he was just 17. Fortunately, the war ended shortly after; he was able to spend his Navy chapter shepherding equipment for various Navy sports teams. While in the Navy, he met Patricia Miner,who served with the WAVES (Women Accepted for Volunteer Community Service), to whom he became engaged. Upon their discharges, he returned to Canton with Patricia; they married in December, 1949.

For the duration of his life, Lou remained a devoted and proud father of the three children he and Patricia raised: Chris (Lynn), Tim (Elizabeth) and Marti (Frank Larkin). After 29 years of marriage, Lou and Patricia parted amicably. Lou later married Valerie (Begert) with whom he shared a deep love for 31 years before her premature death from cancer. Fortunately for our family, Valerie and Patricia became lifelong friends, which allowed family gatherings comfortably to include both.

After the Navy and marriage to Pat, Lou attended Kent State University as part of the GI benefits. Lou was the first in his family to graduate from college, majoring in finance. He began his insurance career as a claims adjustor for various companies before buying the Grable Agency in Uniontown in 1959. Sixty-two years later, now run by sons Chris and Tim, the Ramsburg Agency continues to practice the principles on which that agency was founded—high-quality service to clients and commitment to community.

Despite his enlistment in the Navy, Lou loved airplanes. As a boy, he worked at Martin’s Field in Canton, among other things hand “propping” single-engine planes that did not have electronic ignition. As an adult, he got his Private Pilot license and bought a single engine plane, a Beechcraft Sundowner, that he and Val flew from Ohio along the Atlantic coast from Maine to Florida and west to California and Washington. There were local trips as well, to Burke Lakefront in Cleveland for Indians games or dinner and to Put-in-Bay where they might sleep under the wings.

When Chris and Tim took over the agency, Lou and Val were free to spend winters in Naples, where Lou had purchased a condominium in 1972. Winters were spent warm--which was Lou’s strong preference-- playing golf regularly and gin rummy daily, mostly winning the latter against his condominium neighbors. Across the years, gin games became a late afternoon retirement ritual, whether with Val, condo neighbors in Florida, or his children who visited both in Florida and Hartville.

Papa’s last years were spent in his Hartville home of 38 years. He loved mowing his lawn and planting bushes and flowers, which he continued to do through his 88th year.He lived with his “little boy,” Oliver, a Maltese, and his niece, Margie Brown, who provided extraordinary care to our father. They enjoyed a playful, loving relationship that made our father’s final years even more precious. Margie wants everyone to remember that above all, Lou was “a rascal.”

In addition to his children, Lou leaves behind his grandchildren, Morgan (Justin) Miller, Nathan Caress, Christian Ramsburg, and great grandchildren: Nora and Crosby Miller, as well as dear nieces and nephews.

In observance of Lou’s preference, there will be no calling hours or memorial service.

To order memorial trees or send flowers to the family in memory of Louis Ramsburg, please visit our flower store.