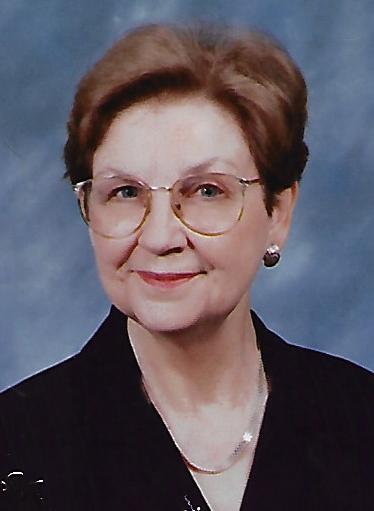 Betty had a musical career that thrived and blossomed as she moved from place to place with her minister husband, Bishop Edwin C. Boulton.   Betty started taking piano lessons at age 5 and became organist for the Lathrop Christian Church at age 12, until she graduated from high school.  While a student pastor, Ed moved to Betty’s home town of Lathrop, MO, where she accompanied choral productions directed by Ed.  Betty and Ed were married on July 17, 1949.

Betty attended William Jewell College in Liberty, MO, and Duke University.  She was organist for Calvary Methodist Church in Durham, NC, where Ed began studying for his Masters at Duke Divinity School.  A student appointment in West End, NC, brought an invitation for Betty to be organist, where she played for three years, until Ed earned his Masters of Divinity.

Betty and Ed returned to the Midwest where Betty became organist at the Republic Community Church, Ionia, IA, where Ed was minister.    It was at this time that Betty was asked to take over the piano students of a teacher who was leaving the town of Nashua, seven miles away.  She went into town every Saturday while Ed tended to their three children.  At lunch time, Betty went to a restaurant where she became friends with an older gentleman, who very soon rallied townspeople to buy a 1911 Sohmer grand piano for her, having it delivered to her door, where she was overwhelmed by such generosity.  Betty played that piano until 1992 when her son, Mitchell, and his family presented her with a Steinway.

After three years, Ed was assigned to the Pocahontas Methodist Church in Pocahontas, IA.  Betty continued private teaching, while providing piano concerts together with the music director of the Pocahontas High School, Bill Mekemson.   When they moved to Bettendorf, IA, Betty continued her private teaching, accompanied choral groups in the public schools and was organist for Asbury United Methodist Church where Ed was minister.

When the district superintendency took Ed and Betty to Dubuque, IA, Betty not only continued to teach privately, accompany choral groups and was organist at Trinity Lutheran Church, she also attended the University of Dubuque, providing the setting for a more systematic study of the pipe organ.

When Ed’s appointment as administrative assistant to Bishop James Thomas took them to Des Moines, IA, Betty became organist and music director for a historic Swedish Lutheran Church ~ a post she held until they left Iowa at the time of Ed’s election to the episcopacy in 1980.

After moving to Fargo, ND, Betty enrolled at Concordia College in Moorehead, MN, where she played several outstanding pipe organs and studied choral directing under Paul Christianson.  A degree of Bachelor of Music in 1986 followed study with Russell Saunders at the Eastman School of Music in Rochester, NY.  In 1987, Betty studied with Dr. Robert Parkins, and played the great Flentrop organ at the University Chapel at Duke.

Shortly after Ed and Betty got settled in East Ohio in 1988, Betty enrolled at the University of Akron and undertook graduate studies with Professor Barbara McGregor.   Since receiving her Master of Music in organ performance in 1992, Betty presented numerous concerts in several States, along with collaborating with Ed in preparing worship events for newly elected Bishops one quadrennial and for a School of Ministry in East Ohio.

Two years after her precious husband, Ed, died in May, 2000, Betty became organist and music director at Emmanuel United Church of Christ in Akron, OH.  She retired in 2011.   In early 2015 Betty moved to Copeland Oaks in Sebring, OH, and soon after she was asked to perform for worship experiences, along with accompanying the Copeland Oaks Chorus.

Betty felt that her interest in music, music history, hymnody and the art of organ performance was not isolated from the common issues of living.  Working out her theology involved her in witnessing for world peace through the social action arm of the Quakers, the American Friends Service Committee.  She read widely about the culture of Native Americans and found their spirituality similar to her own.  Betty supported the cause of conscientious objectors to the military draft, worked with the Council of Churches serving on a special board reviewing books for children in Dubuque, IA, and worked with both the Finance and Pastoral Care and Counseling Commissions in North Canton, OH.

Not only was Betty a gifted musician, she was a woman, wife, mother, lover, philosopher, theologian, thinker, respecter of life, lover of people, animals, and plants.

Betty and Ed had four children:  Lisa (Jim Babcock), Mitchell (Georga), Jim (Julia), no longer together, and Melanie (Bob Pownell).  They had four grandchildren:  Breanna and Shaila (Mitch & Georga’s), Brennan and Tory (Jim’s and Julia’s).   Lucas is Julia’s son who was considered a grandchild.  They had two great-grandchildren, Ava Julaine (Breanna’s) and Bennett Dean (Tory’s and Kendyl’s).

In the words of Betty’s dear granddaughter, Breanna, “Always the epitome of grace, dignity, and beauty, Grandma remains with us in the breeze, the still quiet of the morning, and in the gentle call of the birds she loved so much.”

A Celebration of Life for this exceptional woman will be planned later in the year.

Prayers, memories, and condolences may be expressed to the family at heckerpatronfuneralhome.com.

To order memorial trees or send flowers to the family in memory of Betty Boulton, please visit our flower store.